I don’t think there is anyplace in the United States (and perhaps even on the planet?) that is busier and is bursting with more human energy than Times Square on a nice summer day.   People from all over the world come to the Crossroads of the World to see the sights.  The big Toys R Us store (which is closing soon!), the spot where over a million people gather in the cold every December 31st to ring in the New Year with the dropping of the ball above 1 Times Square, Father Duffy Plaza, the stores, the theaters, the restaurants, and on and on…

For 52Frames, the weekly assignment was Street Photography and, truly, if there is anyplace in the United States that is idea for street photography, it’s Times Square.  The choice to shoot there was made easier by the fact that my day job is right in Times Square, on the corner of 42nd Street and 7th Avenue.  Street photography isn’t as much about the street itself as it is about the human condition, about capturing people in their “natural environment,” without the fancy poses and lighting and all that.

I had a plan to try to shoot Times Square empty of people.  You might ask how I could possibly do that, since there are *always* people in Times Square, 24 hours a day.  Well, there is a way you can do it by taking a series of photographs and, using the magic of Photoshop, edit the people out.  Unfortunately, for technical reasons (including my failure to think it completely through! 🙂  ), it didn’t quite work out.

Nonetheless, I still had a bunch of shots that I took that day.  If I couldn’t get rid of the people, I reasoned, perhaps I could combine the shots.  I found four shots that showed interesting people in Times Square and blended them together.  I believe this shot shows not only the hustle and bustle of the city, but also how people — residents and tourists alike, enjoy being at the Crossroads of the World. 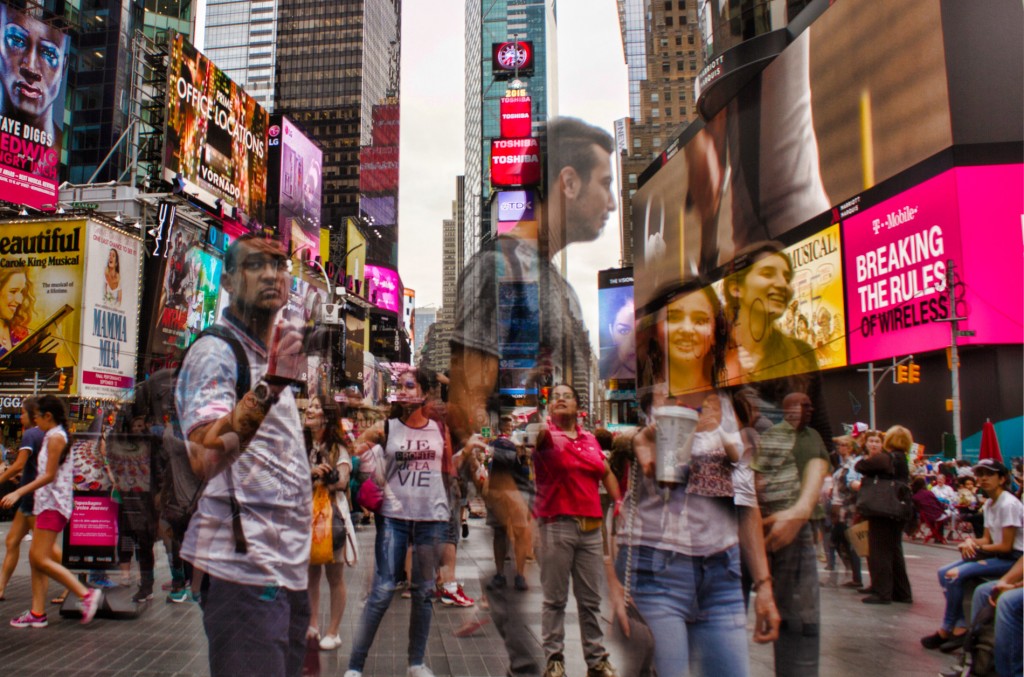