Last time, I caught you up with some of the fall foliage shots I took over the last four months.  But the last four months haven’t been spent exclusively in the woods shooting the leaves.  I live in New York City and, as such, I am luck to have ample opportunity to shoot this wonderfully vibrant, frenetic, diverse city.

I was in the city on the morning of September 11, 2001.  Not only was I in the city, I was about a block and a half from the towers when they fell.  I saw, heard and felt them fall.  It is something that I will not forget for the rest of my life.

Every year, the city pays tribute to the fallen of the day with the Tribute In Light and I try, whenever possible, to photograph them.  Some of my favorite shots come from those shoots, and this year was no different.  I try to find different locations to shoot from each year, and this year I stationed myself in Brooklyn Bridge Park on the evening of September 11.

Of course, I arrived there before sunset and the lights, and my arriving early paid off with some very nice shots.  One of my favorites from then is this shot: 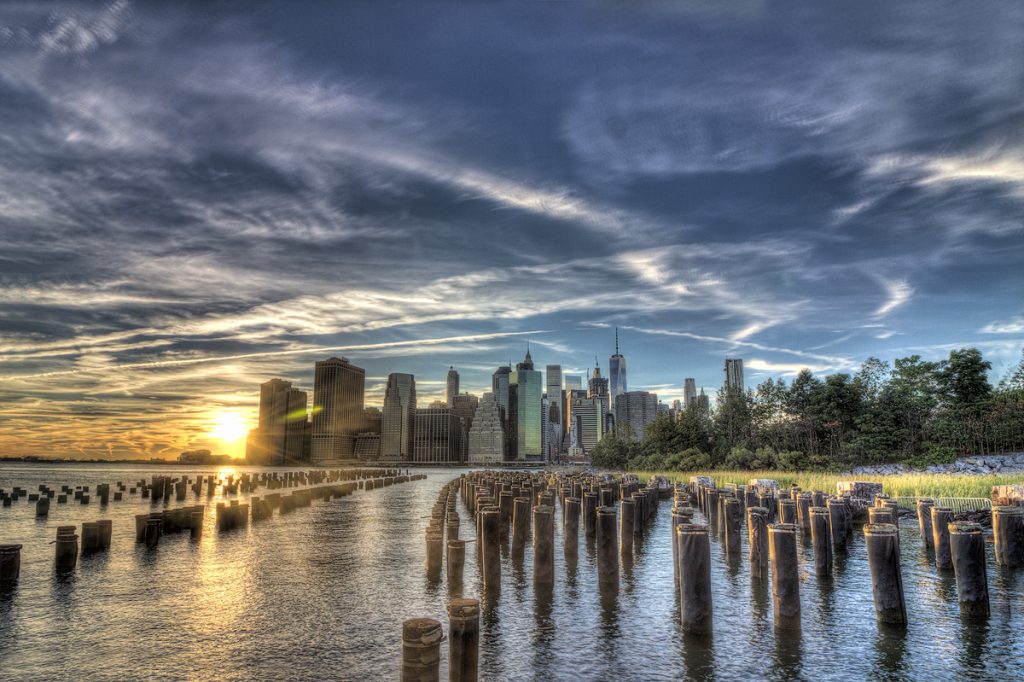 The Manhattan Skyline at Sunset

The setting sun off and clouds were putting on a spectacular show and I could not resist shooting them.  I came away with a few images before the lights came on, but this one was my favorite.

Once the lights were turned on, I (and the hundreds of other photographers that were there) began shooting.  My favorite from that set is this one: 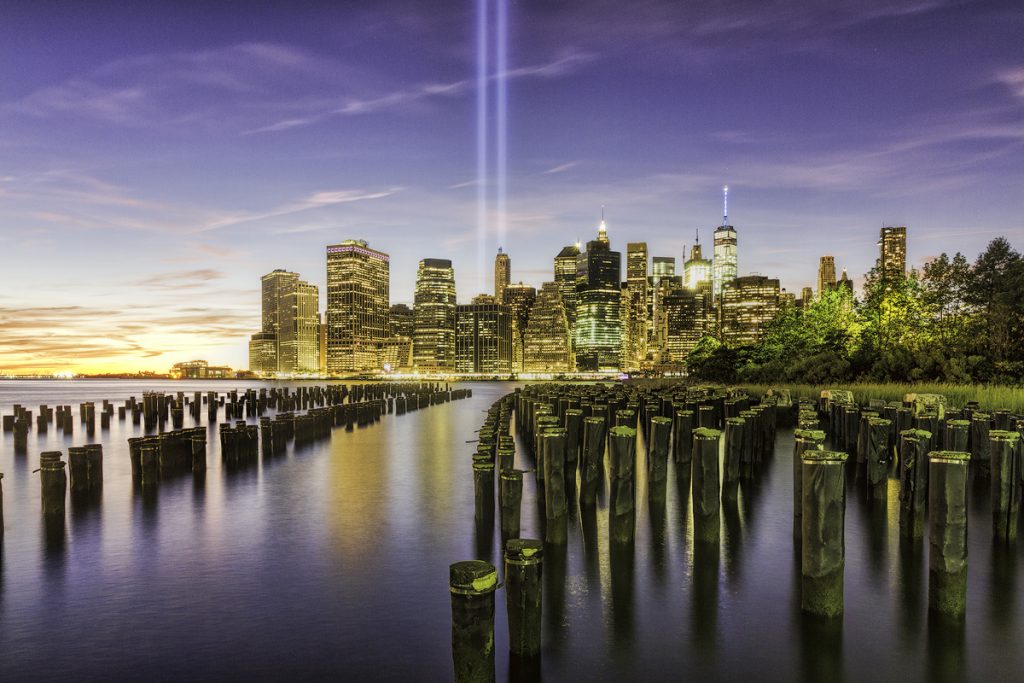 The annual Tribute In Light memorial to the victims of the September 11 attacks, taken from Brooklyn Bridge Park.

As you can see, it was taken from the same vantage point as the previous shot.  However, the difference in lighting and clouds from just a few minutes (the sun had just set only a few minutes previously — you can still see the sun glare to the left of Manhattan) makes this shot very different from the previous one.  The previous shot (to me, anyway) has a certain energy to it.  The bottom picture, however, is very calming.  Perhaps it’s the smoother water (largely due to the longer shutter speed necessary due to the reduced light), perhaps it’s the coloring (purple is a much cooler color than blue), perhaps it’s the dispersal of the crazy clouds in the first shot — whatever it is, the two shots, taken from the same vantage point only minutes apart, are very different.

Of course, once I was there in the park, I spent some time shooting from different vantage points.  As I walked around the park, I found a spot where the lights were set against one of the arches of the Brooklyn Bridge and could not resist setting up my tripod to take the shot.  This was the result: 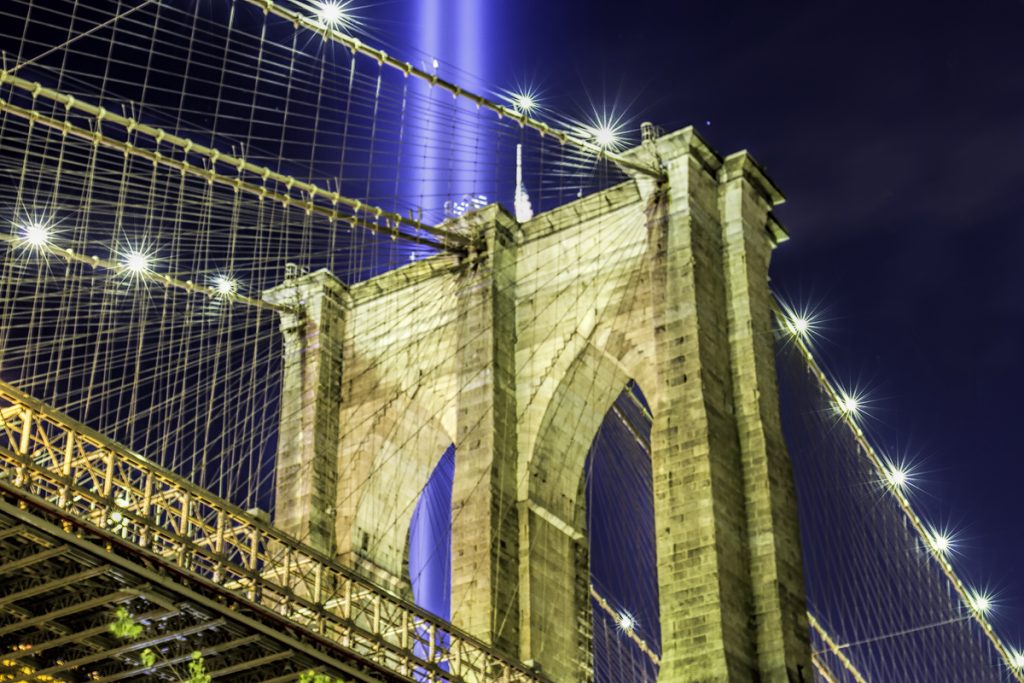 The Brooklyn Bridge is, of course, one of the quintessential symbols of New York City, and photographing the lights together with it seemed very appropriate.  Aside from the bridge arches and the lights, I also happen to like how the lines go in various directions all over the picture, giving the picture some dynamic energy.

Until a few weeks ago, I worked in the Empire State Building and, as such, had the opportunity to go up to the Observation Deck and take some shots.  I went one day towards sunset and spent some time shooting.  I came away with a few shots that I really liked: 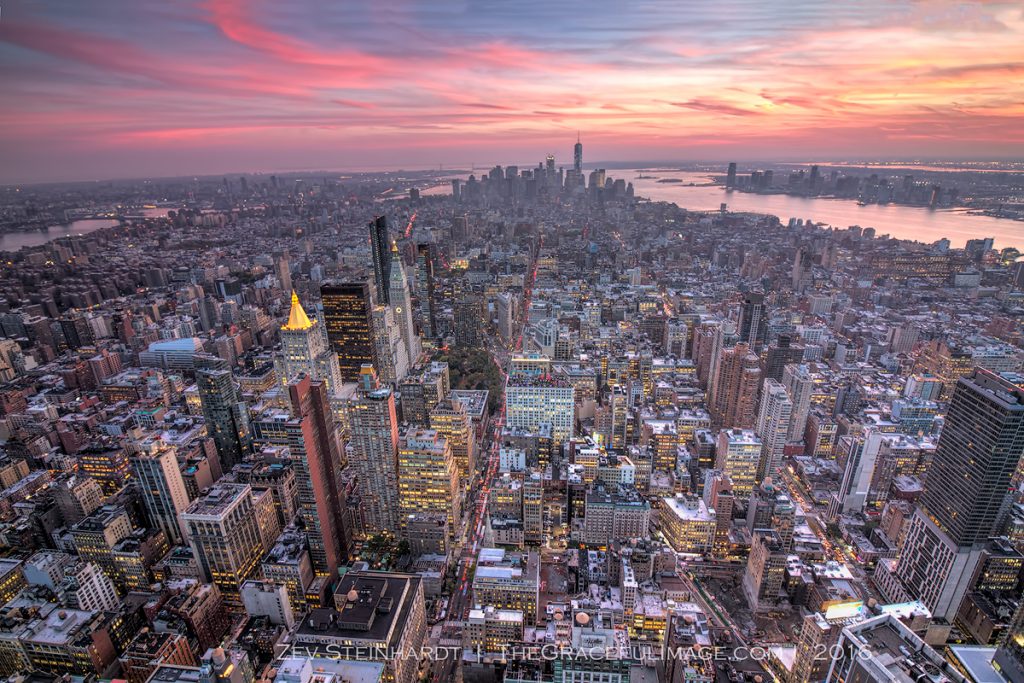 A sunset over Manhattan, south of 34th Street 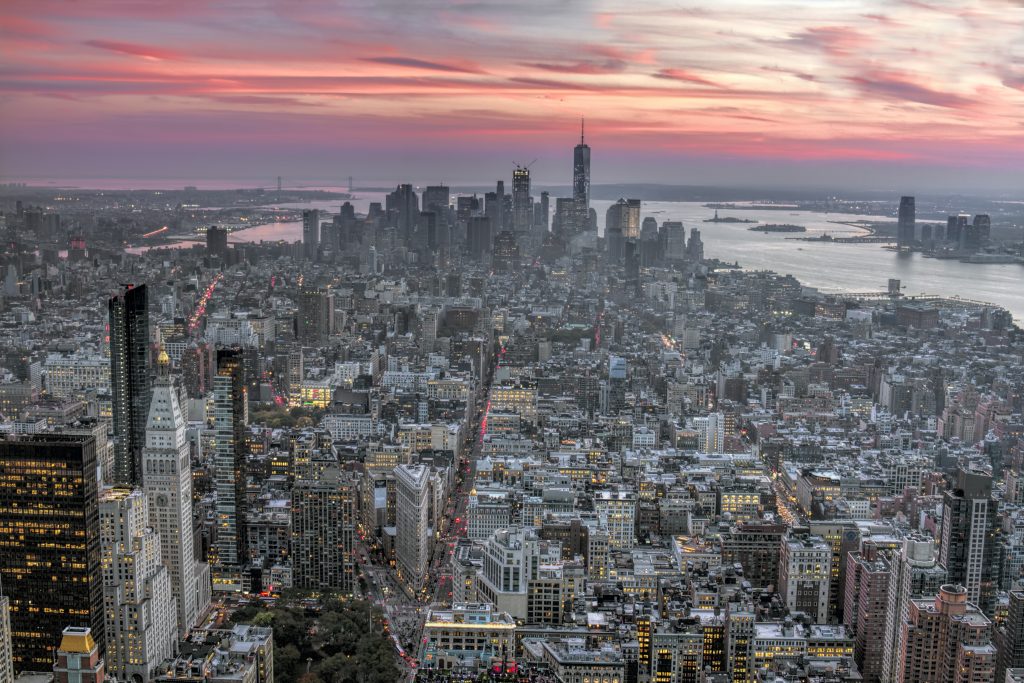 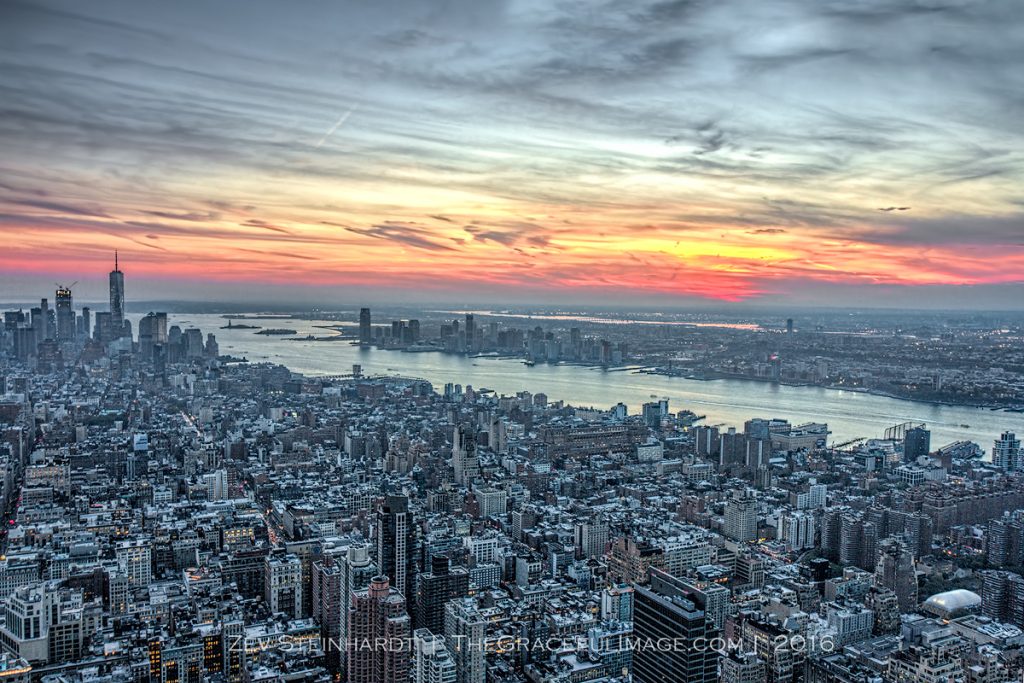 The sun setting over the island of Manhattan and New Jersey

These shots make me realize that one of these days, I have to take a helicopter ride over the city and get some shots from really high up.  🙂