I had the good fortune to be shooting in Western Connecticut last fall.  I spent most of the day at Macedonia Brook State Park and, towards the end of the day, went, almost as an afterthought, to nearby Kent Falls State Park (since I am a sucker for a nice waterfall shot).

The shots I took at Macedonia Brook were nice, but I can’t honestly say that any of them truly resonated with me.  And the same held true for the waterfall shots at Kent Falls.  Nice shots, but none that made me say “Wow… that’s special.”

There was, however, a small covered bridge at the Kent Falls site.  It wasn’t very long… it spans a small little brook on the way to the falls.  The inside was dark and dusty.  Graffiti was scrawled on just about every surface.  However, there were a few windows in the bridge, and these looked out towards the grounds and the falls.  Looking at the windows, I couldn’t help but be struck by the contrast between the drab, wooden, graffiti-stained beams of the bridge and the bright, colorful and vibrant autumn grounds outside.  I saw that and thought it would be interesting to take that contrast and, perhaps, even play it up a bit more in a photo.

I took several shots of the scene and blended them together.  I purposely made the beams darker and drained some of the color from them while boosting the colors outside the window, all in the hopes of enhancing the natural contrast between the two parts of the photo.  Lastly, I decided to enhance the contrast even more by making the scene outside the window more resemble a painting than an actual photograph, almost creating a reality/fantasy dichotomy. 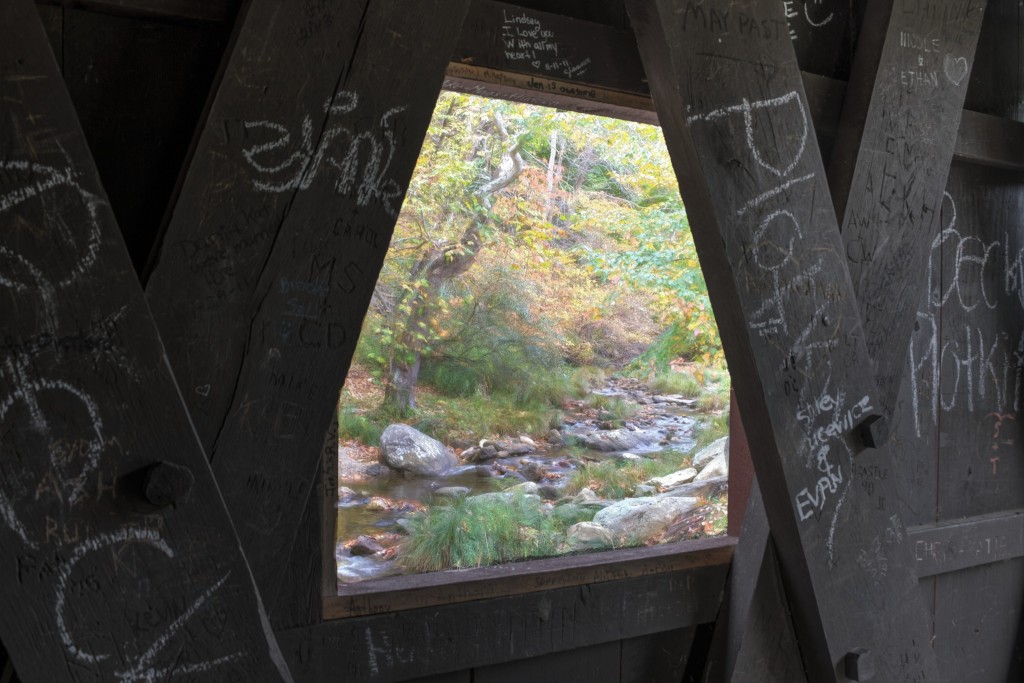 And to think that this shot was not what I going to Connecticut to shoot that day.  I was going to shoot nature in a state park.  I went to the second park, as an afterthought, to shoot the waterfalls that were there  — not this covered bridge (which I didn’t know existed).  I could easily have focused on the first park or the falls at the second park to the exclusion of all else – but instead I found this shot.  Just goes to show that you never know when a photographic opportunity is going to present itself.

What about you?  Have you ever gotten a good shot that wasn’t planned but just happened due to circumstance?  What do you think of the picture?  Would you have processed it differently?  I’d love to hear.  Please leave a comment. 🙂

P.S.  Please be sure to check out the MyPhotoLessons blog for photography and Photoshop tutorials and lessons.  The latest one is an introduction to Photoshop layers and layer masks for the complete beginner.