“You cannot take pictures her 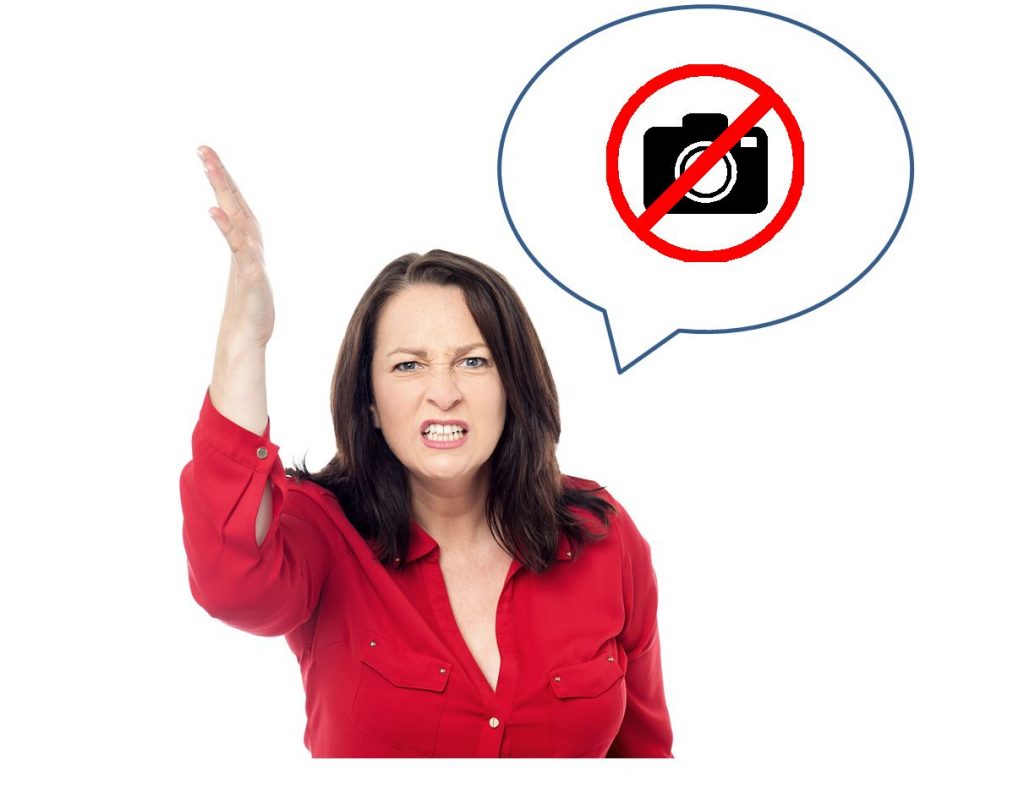 e!” the Russian lady in red barked at me.  “There are children playing here.  I do not give you permission.”

I was in Fort Tryon Park, on the Upper West Side of Manhattan.  It’s a beautiful park, a place to escape the concrete, steel, glass and asphalt that comprises the vast bulk of Manhattan.  It’s a rare oasis of green in the middle of the urban jungle.  People come there to jog, stroll, admire the flowers in the Heather Garden, enjoy the wonderful views of the Palisades and the Hudson River, and to bring their children and pets to play on the lawns.

And, of course, to photograph.

I happen to love photographing the parks in New York City, the places that dispel the notion of the Big Apple being made solely of man-made materials.  And so, there I was, photographing in the park, taking a wide shot of one of the lawns, when the red lady ordered me to stop.

“Actually,” I responded calmly, “I can take pictures here.  This is a public park.  I don’t need your permission.”

“I do not let,” she responded.  “I am the nanny and the mother said no one can take pictures of her child.”

Normally, I’m a pretty reasonable person.  Had she come over to me and asked me nicely “Would you mind not photographing here?” I might very well have just picked up my camera and moved on.  But I don’t respond well to orders being shouted at me from someone who has no rights to issue such orders.

“If that’s the case,” I said, “then I suggest that you keep her facing the other direction.”

I was waiting for her to say that she was going to call the police, but that didn’t happen.  Instead, she and the kid simply left.

Photographing people in a public space where they have no expectation of privacy is not a crime and does not require anyone’s permission.  Period.  Photographers have just as much a right to use a public park as anyone else.  There is nothing nefarious or illegal about taking a wide shot with people in it (which is what I was doing) or even, for that matter, close up shots of people.  If you’re out in public, you’re fair game.

Most parents who act like this probably think they are protecting their children from some awful fate, but what fate, exactly, are they protecting them from?  To the best of my knowledge, no child (or adult, for that matter) has been harmed by the act of having their image captured on a digital sensor or film.  Are they thinking that I’m going to use their child’s picture for some nefarious purpose?  If that were the case, I wouldn’t need to go to a park to take pictures of kids — the internet has about a billion pictures of kids available that I can use for free without having to leave my living room.  Are you afraid I’m going to use your child’s image commercially?  Not without a model release I’m not.  Are you afraid that this somehow violates your child’s privacy?  Well, you’re already out in public where everyone can see you.  So, what exactly are you afraid of?

I understand that people want to protect their children.  As a father of three myself, I get it.  I even understand that when people think there’s a threat to their children, they may even go into mama (or papa) bear mode to protect them.  But people (including parents) have to be able to distinguish between real threats and things that are innocuous – like people in public with cameras.  Your child has a far greater chance of being hurt by the jumping rope she’s playing with than my camera.  Watch your child, and don’t mind me with my camera.